School is starting this week – time to get organized! We’ve had a pretty laid back couple of weeks, spending time with Nana & Poppy who were visiting from Perth (which was very nice) … it’s going to be hard to get back into the everyday routine. (Specially without Nana here to help with dishes, washing, and playing constant card games with the kids!)

I have enjoyed trying out some recipes in the new Thermomix cookbook, “My Way of Cooking” – I think our favourite so far has been the Cantucci… I used a lot less sugar than the recipe said (and changed it to Rapadura), and used spelt flour, and added pistachios, but otherwise it was mostly the same I’ll try to get my version of the recipe up soon.

For those of you who are sending the kids back to school this week, there’s some great lunchbox ideas on the Thermomix Forum – have a look. Also, our favourite nutritionist, Cyndi O’Meara, has some really great, healthy ideas in this youtube clip – check it out for alternatives to cling wrap (which contains additives not suitable for children), how to keep lunches fresh, how to organize lunches at the start of the week so it’s not such a rush each morning, and more…

If you don’t yet have Cyndi’s book, “Changing Habits, Changing Lives” I highly recommend it! Cyndi will be coming to speak for us up here on the Tablelands in February – come along and get some great advice on healthy eating (and see us demonstrate the amazing Thermomix and taste what we cook!)

If you need help planning your menu, (or you’re wondering ‘why bother??’), check out Menu Plan Monday at I’m An Organizing Junkie. Have a great week!

[TMX – prepared and/or cooked in the Thermomix] 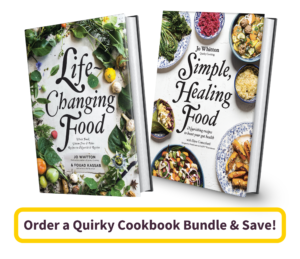 Happy Monday! Here’s some tips for starting you